The general said: “The following questions remain unanswered. When and at whom can I shoot? In such missions, more often than not you have to shoot first and ask questions later. And so far, UNIFIL troops can only shoot in legitimate defense. But then, it is usually too late.”

Whose to fight? at antiwar

A new report by the Massachusetts Department of Health details how the level of nicotine found in US cigarettes has risen about 10 percent in the past six years, making it hard to quit and easier to get hooked.Â  The study shows a steady climb in the amount of nicotine delivered to the lungs of smokers regardless of brand, with overall nicotine yields increasing by about 10 percent. Massachusetts is one of three U.S. states to require tobacco companies to submit information about nicotine and the only state with data going back to 1998.

An excerpt: “The study found the three most popular cigarette brands with young smokers – Marlboro, Newport and Camel – delivered significantly more nicotine than they did years ago. Nicotine in Kool, a popular menthol brand, rose 20 percent. More than two-thirds of black smokers use menthol brands.” 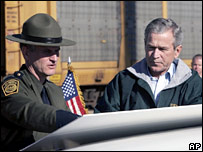 Is Bush a robot that came down from Mars to single handingly mock humanity?

As if impeaching the president for getting a lil’ dome wasn’t enough, Ken Starr is atÂ it again.Â  His latest mission?- petitioning a court to uphold a suspension for a student that held up a sign saying “Bong Hits 4 Jesus” during the Olympic torch relay in Alaska.

Vanity Fair has a beautiful and disturbing Photo Essay with images of September 11, 2001.

The best compilation of archival footage of GW being a complete goon.

The entire “Free To Choose” television show from Nobel Prize winning economist, Milton Friedman. Considered the best crash course of economics to ever grace the tv box and a glipse into the mind of a wonderful buffoon.

One thing’s for damn sure… the world’s done gone crazy. Sri Lankan ninjas are killing eachother left and right already – but now they even got buddhist monks beefing over there. My Ninja, Please! I’m not making this up:

COLOMBO (Reuters) – Protesters calling for an end to recent violence in Sri Lanka found themselves brawling with hardline Buddhist monks on Thursday, after a rally dubbed a “peace protest” turned unexpectedly violent.

What is really good when cats who pledge to practice charity on all sentient beings are beating the snot out of eachother? Nobody got killed tho, which is a good indication of the level of ninjahood in Sri Lanka… not exceptionally high. I mean it didn’t even make the list in the rigorous google trends test that we conducted.

Here’s more:
Some more moderate Buddhist monks, protesting for peace, were already on the stage when punches were thrown. Soon, monks’ robes and fists were flying, although no one was badly hurt, witnesses said.

“They were saying we should go to war,” said pro-peace monk Madampawe Assagee. “We like to listen to other opinions so we let them do that but then they started fighting and we couldn’t control some of our people. They tried to make it a big fight but we settled it in a few minutes.”
Article Via: Yahoo News via Reuters

“Corrections Corporation of America, a private firm that operates prisons like this one in California City, Ca., saw its revenue from holding immigrants jump to $95 million in 2005 from $70 million the year before.”

I know you all love how half of our headlines have exclamation points. Just for the record, they’re our way of denoting some true ninja ish.

Anyways, for the most part, I try to stay out of other people’s love lives, but this one is just too good to be true. I didn’t know it, but rapper Eve has been dating Teodorin Nguema Obiang, the son of the dictator of Equitorial New Guinea, President Obiang.

President Obiang has been in power since 1979 and reportedly siphons $700 million a year from the oil rich country each year, while it’s citizens live on $1 a day. He doesn’t stop at being a thieving bastard either. He killed his own uncle and the rumor is that he was behind his brother’s “suicide.” Oh yeah, and several different sources have reported that he has engaged in “cannibalism.” Whooo… Yeah, I said he was an evil-ass ninja, didn’t I?
The money he steals goes, at least in part, to his playboy son’s romantic adventures. From the article, referring to Teodorin, Eve’s love interest:

“Teodorin, the Minister of Forestry, or the “Minister of Chopping Down Trees,” as some call him, pursued Eve relentlessly until she finally “gave up” and started going out with him, sources told us. The international playboy spent $700,000 at Christmas to rent Paul Allen’s yacht to fete her on St. Bart’s, tooled around in one of his two Bentleys, and invested $25 million in a rap label, Detroit’s TNO Entertainment.”

A source close to Eve says simply: “They will never date again.”

Apparently, Eve has come to her senses and realized that if she gets any closer to the family, she might end up “committing suicide” or getting eaten. Let’s hope it’s not already too late. 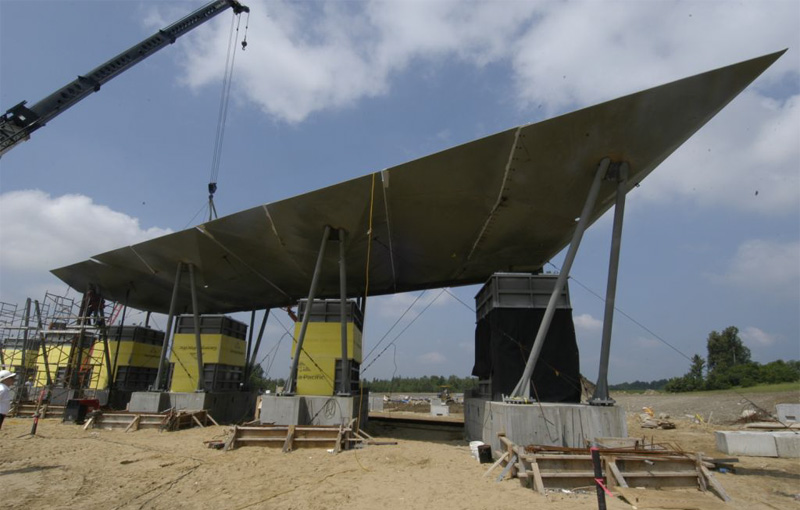 So, apparently there is an exhibition currently traveling across the country displaying images of proposed [some to be built] US border stations [both for Mexico and Canadia]. It will be exhibited in DC until Oct. 15th, and is meant to showcase the work being done by Homeland Security’s new border program, and the past and present work of the GSA’s Design Excellence Program. New stations are meant to be more welcoming/inviting, expressing the United States desire to take in any willing travelers…unless they’re Mexican. For real tho, it does look as if the government funded a decent design competition, and plans on building some of them. Read more here at Subtopia.

By the way, Subtopia has been Ninja tested, Sensei approved, so you should just check it on the regular. When I first saw this I thought maybe someone had finally built a stargate, but I guess that’s asking too much. What it is is AMOEBA, a ring of wave machines that can be programmed to display images in the water, such as the ’s’ seen and other simple shapes like smiley faces and hearts [any real ninja would’ve made a shuriken, but whatever]. The creators hope to make a large scale version, hopefully to manipulate whole regions of the ocean. I’m thinkin that in 10 years time pepsi will have an add across the south pacific.

So, I was originally going to post this as an interesting lil machine that did cool ish with water, but then I re-read the post at Tropolism and realized that the creators of AMOEBA actually think that it could fall into the hands of al-Qaeda and be used to destroy Cali. All because these clowns made an ‘S’ with some wave machines. How is EVERYTHING terror related now? Besides, those cats from al-Qaeda can’t swim! Ninjaplease!
“Unfortunately, there is also the possibility of weaponizing AMOEBA waves in the same way one could easily turn any natural earth systems, e.g. earthquakes, into a national security threat. Because once the machine falls into the hands of al-Qaeda, they can then easily wipe Los Angeles off the map with a tsunami. In the shape of Versailles.”

Article here at Tropolism [image too]

So, apparently info has been leaked suggesting that the government is involved in top secret plans to build a superhighway from Mexico to Canada, bisecting the US, as a means to bolster a struggling NAFTA. This 4,000 mile 10 lane highway will cost upwards of 184 BILLION dollars [our dollars, by the way…ninjas in Mexica ain’t got no money son!], and include space for new rail lines. And heads thought illegal imigration from the south and traffickin from the north were bad now… peep more here from Raymond Learsy.

*caution: conspiracy theory to follow* How the hell can our government be building bigger, longer roads, encouraging more driving? Thats 184 billion dollars that could go towards some real ninja ish, like transporters or cold fusion or something. Oh, and multiply the 184 billion by at least 3, cuz all us Boston heads know how government funded projects get budgeted. Ginormous Dig anyone?
Aricle from Archinect

A video archive of excerpts fromÂ a broad range of theorists concerning the the JFK assassination.

According to a recent poll published in the Washington Post, 30% of Americans were unable to identify in what year the 9/11 attacks occurred! Don’t believe me? Read the article here

Actually, we here at myninjaplease do believe that all ninjas should have a say in their government (in actuality, not just in theory), but between this poll, and the one from less than a month ago that showed that 50% of Americans still believe Saddam Hussein had WMDs, it is evident that Americans definitely need a higher degree of civic awareness.

[Ed: In all fairness to the masses, only 36% of Americans believed Saddam had WMD last year (still not a stellar figure) - the bump in poll numbers was likely due to some recent masquerading by a few members of the GOP who attempted to claim that some old, nonfunctional, mustard gas shells that were found in Iraq justified the whole escapade over there (I know, you thought they said finding WMD didn’t matter because it was all about freedom and democracy, but hey, even congressmen can be indecisive when it’s convenient). Fox “News” diligently repeated the talking point over and over again, as one could have predicted - proof again, that if you repeat anything enough on TV, people will regard it as fact…]