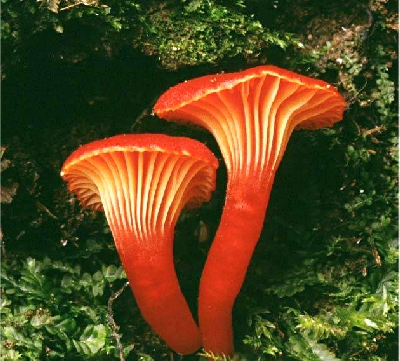 In a bizarre alternative to photosynthesis, some fungi â€œeatâ€ radiationâ€“with the role of chlorophyll taken by melanin, a chemical also found in human skin.

Saifullah, which literally means “sword of Islam,” is the honor that is being bestowed upon the notorious figurehead of the Al Qaeda organization.Â  This new development is a direct reaction to the recent British Knighthood of Salman Rushdie.

Some Muslims view the honor of knighthood for the author to be offensive, given the controversial book that Rushdie wrote, the Satanic Verses.Â  I’m not really sure what to say about this but… here’s a few links.

In October 2006, Bush signed into law the John Warner National Defense Authorization Act for Fiscal Year 2007. Quietly slipped into the law at the last minute, at the request of the Bush administration, were sections changing important legal principles, dating back 200 years, which limit the U.S. government’s ability to use the military to intervene in domestic affairs. These changes would allow Bush, whenever he thinks it necessary, to institute martial law–under which the military takes direct control over civilian administration.

Sec. 1042 of the Act, “Use of the Armed Forces in Major Public Emergencies,” effectively overturns what is known as posse comitatus. The Posse Comitatus Act is a law, passed in 1878, that prohibits the use of the regular military within the U.S. borders. The original passage of the Posse Comitatus Act was a very reactionary move that sealed the betrayal of Black people after the Civil War and brought the period of Reconstruction to an end. It decreed that federal troops could no longer be used inside the former Confederate states to enforce the new legal rights of Black people. Black people were turned over to the armed police and Klansmen serving the southern plantation owners, and the long period of Jim Crow began.

During the 20th century, posse comitatus objectively started to play a new role within the bourgeois democratic framework: as a legal barrier to the direct influence of the powerful military establishment and the armed forces over domestic U.S. society. It served to some degree as an obstacle against military coups and presidents seizing military control over the country. (However, National Guard troops have been legally available to the ruling class for use inside the U.S., and there have been other loopholes to the prohibition of the use of armed forces domestically, as in the mobilization of Marine troops during the 1992 L.A. Rebellion.)

So the changes to posse comitatus signed into law by Bush are extremely significant and ominous. Bush has modified the main exemptions to posse comitatus that up to now have been primarily defined by the Insurrection Act of 1807. Previously the president could call out the army in the United States only in cases of insurrection or conditions where “rebellion against the authority of the United States, make it impracticable to enforce the laws of the United States in any State or Territory by the ordinary course of judicial proceedings.” Under the new law the president can use the military in response to a natural disaster, a disease outbreak, a terrorist attack or “other condition in which the President determines that domestic violence has occurred to the extent that state officials cannot maintain public order.”

The new law requires the President to notify Congress “as soon as practicable after the determination and every 14 days thereafter during the duration of the exercise of the authority.” However Bush, as he has often done during his presidency, modified this requirement in his signing statement, which declared, “The executive branch shall construe such provisions in a manner consistent with the President’s constitutional authority to withhold information the disclosure of which could impair foreign relations, the national security, the deliberative processes of the Executive.” In other words, Bush claims that he does not even need to inform Congress that martial law has been declared!

A memo sent last year by a voting machine maker to election officials in Florida has reignited controversy over the reliability and accuracy of the company’s machines. Voting activists are now renewing calls to examine source code used in the Election Systems & Software machines during a close election last November.

Activists say the memo, which was uncovered last September but only came to prominence last week, proves that ES&S and Florida election officials knew about problems with the company’s iVotronic touch-screen machines before the election, yet withheld the information from a court to prevent activists from examining the voting software.

The software, activists say, is crucial to a dispute over the 13th Congressional District race in November, in which Democrat Christine Jennings lost by fewer than 400 votes to Republican Vern Buchanan. Jennings and groups of voters filed separate lawsuits contending that the results were questionable because more than 18,000 ballots cast in Sarasota County mysteriously recorded no vote in the congressional race.

Activists say the ES&S memo points to a possible reason for the high “undervote” rate.

“This memo is the smoking gun that says, ‘Yes, Houston, we have a problem,’” says Reginald Mitchell, lawyer for People for the American Way

So it has come to my attention that since the discussion of roving bugs first surfaced on the internet, many people have blogged about it.

So many people have mentioned this issue in fact that it has generated a sort of hysteria about the issue.Â  The generation of such hysteria has obviously spurred a coalition of naysayers.Â  I just wanted to reaffirm to people that the technology is obviously possible.Â  Some articles go as far as to claim that the roving bug could be activated even when the phone was switched off.Â  That might be a little hyperbolic.

Anyway, this guy disagrees.Â  Here is a little more about that roving bug bust.

The article from which this graph originates is very interesting. So is this.

The other thing is that I was having a conversation with my dad the other day and he made a good anecdotal point about why free market capitalism pisses people off who live within poor market economies, I mean, besides the obvious reasons.Â  He pointed out what happened when a company from the UAE tried to buy American ports. It wasn’t very pretty.

I was saying in the last post that many countries blame their financial problems on the sharky nature of the world bank which can have the (purposeful or accidental) effect of destabilizing an economy, and/or supporting people financially who really don’t need to be in charge.Â  Argentina is one of the countries that really hates the organization.Â  Read and educate yourself.

The image of the Argentinian World Bank protest originates from this article.