from nola
choose your poison

According to the U.S. State Department, in April 2005 there were about 520 detainees on the base from more than 40 countries. At that point, 232 detainees had left Guantanamo Bay: 149 were released and 83 were transferred to other governments.

September 21, 1938: Churchill issued a statement to the press in response to the proposed partition of Czechoslovakia, calling it the “complete surrender of the Western Democracies to the Nazi threat of force” and warning it would have larger consequences:

It is not Czechoslovakia alone which is menaced, but also the freedom and the democracy of all nations. The belief that security can be obtained by throwing a small State to the wolves is a fatal delusion

September 23, 1938: Chamberlain met again with Hitler at 10:30 p.m., in a meeting that lasted into the small hours of the morning. Chamberlain was relieved to receive Hitler’s assurance that his new demands would be his last:

Hitler repeated to me with great earnestness . . . that this was the last of his territorial ambitions in Europe . . . [H]e said, again very earnestly, that he wanted to be friends with England, and that if only this Sudeten question could be got out of the way in peace, he would gladly resume conversationsâ€¦.

Bush received a surprise from a rebelling turkey. JERUSALEM (Reuters) – Israel is using nanotechnology to try to create a robot no bigger than a hornet that would be able to chase, photograph and kill its targets, an Israeli newspaper reported on Friday.

The flying robot, nicknamed the “bionic hornet”, would be able to navigate its way down narrow alleyways to target otherwise unreachable enemies such as rocket launchers, the daily Yedioth Ahronoth said.

The prospect of tryanny may not grab the headlines the way vivid stories of gun crime routinely do. But few saw the Third Reich coming until it was too late. The Second Amendment is a doomsday provision, one designed for those exceptionally rare circumstance where all other rights have failed – where the government refuses to stand for reelection and silences those who protest; where courts have lost the courage to oppose, or can find no one to oppose, or can find no one to enforce their decrees. However improbable these contingencies may seem today, facing them unprepared is a mistake a free people get to make only once.

The Doomsday Weapon by Jacob Hornberger

letter from a teacher

“It’s certainly been the trend in the past 10 years in urban areas that are becoming gentrified,” said Ric Curtis, an anthropology professor at John Jay College of Criminal Justice who specializes in the drug culture.

get it delivered at katu

They did it for fun, but Honda can do it better. [production info] Made by kinetic artists Peter Fischli and David Weiss. 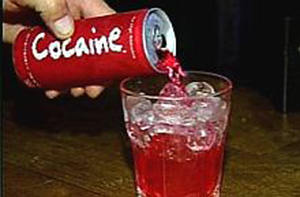 This new energy drink, ‘Cocaine’ is coming under fire from parents and politicians, concerned it sends a strange message to children [wow…wonder why?]. Now, we here at MNP are all about your freedoms, and feel that in your leisure time you should be able to do you, even if your life resembles a certain Grandmaster Flash song. That being said…Cocaine, the energy drink? These people wanted the exposure. I actually wasn’t sure about posting this, because it was part of their plan people – dupe us into talking about their product so they get free advertising [speaking of shameless product placement…have you printed up any MNP flyers yet?].

Its claim to fame here [outside of the name] is that it packs 280 milligrams of caffeine in 8.4 ounces….meanwhile an ‘acute overdose on caffeine’ is just anything over 250 milligrams [thanks wikipedia], or roughly 3 cups of coffee in a row.

So now politicians want them to pull the product or change the name…and some stores have stopped selling it. Point is tho, do we really need another energy drink? I mean, I’ve watched people pound Redbull right after telling me how bad my 3 cups of coffee a day are for me. Point is tho, who cares? These fools are gonna make millions of dollars in the end cuz they chose a ridiculous name that they knew damn well would start ish [you know a bunch of people were sitting around a table talking about this before the product launch, and it was originally called something like Flash or Shock].

[articles at Newsday and MSNBC ]

[ed note: thanks to Dubs for the links]

Myninjaplease.com has always advocated responsible civic participation, and that means understanding the issues and candidates before you vote. Granted the process can be frustrating, with the choice between two candidates not being much of a choice at all, but if you are going to exercise your right to vote, don’t be ignorant about the facts – that’s not ninja-worthy and it won’t get you invited to the myninjaplease dojo (this doesn’t mean you have to follow the link in this post – sometimes it’s pretty obvious who doesn’t derserve your vote…)

These should make you want to go to the polls on the 7th – fools like ‘em needed to get voted out:

“Senator James Inhofe, R-OK, calls climate change a hoax, voted against stem cell research, and since the 2002 election has taken more than $500,000 in campaign contributions from the oil, gas and electric industries. He’s also the chair of the Senate Committee on Environment and Public Works.”

“Rep. Joe Barton, R-TX, is a skeptic on global warming and sponsored the House version of the Clear Skies Act, which would actually increase the amount of pollution permitted, according to the Sierra Club. He’s also the chair of the House Committee on Energy and Commerce…This year he received more than $383,000 from oil, gas and electric companies.“

Yeah – they are true – only in America…

Check out Project Vote Smart to get the low-down on your representatives and senators (unless you are like one of the ninjas here at MNP and lives in our nation’s capital and thus has no voting representation in congress – don’t you just love the irony?)

Here is a great article from Salon.com about all the shadiness surrounding electronic voting machines and the new HBO documentary on the subject. Some quotes:

“Diebold has all you could ask for in a corporate enemy — ties to the Republican Party, a history of both lying to and currying favor with officials, a brusque and secretive posture in its dealings with critics and the press, and, worst of all, a pattern of technological ineptitude so startling you sometimes wonder if the people who work there are trying to sabotage the vote…Either they don’t know how vulnerable their equipment is (which they should, as various studies have discovered alarming security flaws), or they know and aren’t admitting it. Neither scenario inspires confidence.”

“But actually, the problem is even worse than the film suggests. “Hacking Democracy” does not mention the work of Ed Felten, the respected Princeton computer security researcher who proved, in a September report, that it’s possible to install a kind of voting machine “virus” on Diebold’s memory cards. Felten’s study is a blockbuster: Conducted on the very same machines that will be used throughout Georgia and Maryland this year, Felten showed how attackers can secretly attach a vote-stealing program that spreads from voting machine to voting machine in a completely undetectable fashion.“

[Ed. Note - Salon.com requires you to view a brief ad before reading their content - def. worth it though]

Great Op-Ed in the Seattle Post Intelligencer – “Election, Economy, and the Price of Gas”
Some excerpts:

Enjoy the price of gasoline now, because when the Saudis lower production, we could go right back to the $3 nightmare of three months ago…Prince Bandar bin Sultan, Saudi Arabia’s ambassador to the United States, “told President Bush that the Saudis would cut oil prices to ensure a strong economy for Election Day.” This prediction has come to fruition…

U.S. oil company executives also possess the power to allow price drops for the election. They have enough room to play — including last year’s collective $100 billion in record profits and Exxon Mobil’s own near record $10.6 billion profits this past quarter. Oil executives are full of fear over new leadership in a Congress that would investigate them.

They are particularly afraid of Rep. Charles Rangel chairing the Ways and Means Committee. Rangel could ask: Why do companies that generate record profits from U.S. consumers receive $7.2 billion in government subsidies? Why was U.S. Rep. Tom DeLay, R-Texas, then Republican House leader, allowed to hold open a five-minute floor vote in the House for 48 minutes until some $2.6 billion in tax breaks for the major oil companies were approved by a two-vote margin? Just this week we learned of the administration’s refusal to pursue hundreds of millions in fees for offshore drilling.