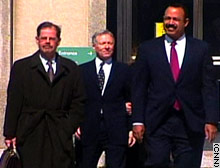 WASHINGTON (CNN) — Former White House aide I. Lewis “Scooter” Libby has been found guilty on four of five counts in his perjury and obstruction of justice trial.

Libby was convicted of:

Jurors cleared him of a second count of making a false statement relating to a conversation he had with Matt Cooper of Time magazine.

Libby, 56, faces a maximum sentence of 25 years in prison and a fine of $1 million. A hearing on a presentencing report is scheduled for June 5.

CNN senior legal analyst Jeffrey Toobin said, “He is virtually certain to go to prison if this conviction is upheld.”