Before you start reading, let me reiterate that none of the links in our articles are ads. All of the links bring you somewhere relevant. Click freely and frequently. 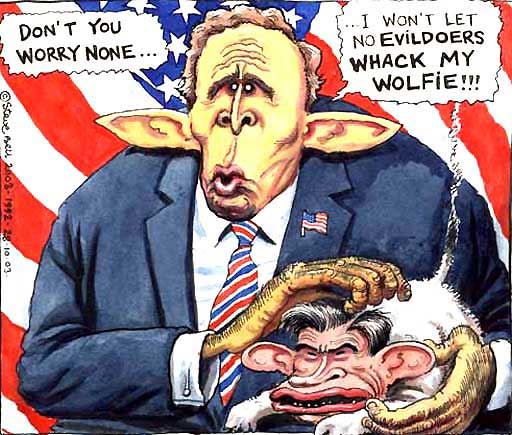 With all the recent scandal surrounding Wolfowitz and the World Bank, the mainstream media is still so far away from having an actual discussion about the organization and its counterpart, the IMF.

In a nutshell, what happened is Wolfowitz gave his girlfriend a few financial perks, in the form of pay raise. This was unethical given that he is the president of the organization. The World Bank deals exclusively with funds, and there has been major criticism since its inception that its accounting practices are not clear. For the president of the organization to do this reflects, in my opinion, horribly on the institution in general.

One Fox News blogger makes the point that there is a certain level of hypocrisy in the members of the World Bank (which includes 184 countries/members) all of a sudden turning around and pointing the finger at Paul Wolfowitz:

I don’t know whether his efforts to secure a job for a girlfriend meet the resignation test. I do know that it’s more than a little amusing who’s judging him: an organization that’s been playing financial shell games for years and whose members have some curious conflicts of their own.

So now that Wolfowitz is resigning, the White House is going to appoint a new head of the organization again, instead of installing a transparent and democratic process. Not that the members of the World Bank board are to be trusted anyway, but we’ve been appointing the president of the organization for half a century since its inception and it hasn’t really worked out yet.

My whole thing is that while this scandal “spotlights” the problems behind U.S. control of the bank, we can’t just let Wolfowitz resign and let the issue die. The problem, obviously goes deeper than Wolfowitz.

The World Bank was started in the aftermath of World War II with the goal of helping these war-ravaged nations (namely France) rebuild. Like I said before, the U.S. has always appointed the president informally. The conference where the World Bank was established was called Bretton Woods, which went down in NH. So countries like France were devastated and the basic idea became “let’s lend them some dough so they can get together.” Inclusive in this was the idea of ridding the world of all the problems that hindered markets previously. To accomplish this they had to outlaw many of the economic practices of Europe which included unfair devaluation of currency and excessive fining. What would happen was say France was stealing your business with a cheap import, they would devalue French currency so as to give them less buying power, etc.

The idea also carried an idea of free market capitalism, in essence the idea that businesses would be able to flow freely over borders and that there would be so-called “equal access to natural resources.” That really means that anybody with the capitalistic power can enter your country and suck you dry. This kind of happy-go-lucky capitalism would be all well and dandy if some of the poorer nations were able to stack as much green as the richer nations and therefore actually have free access to these resources. Unfortunately, they are not able to do so, and furthermore have no access to the higher up positions in the bank. In this article, Joseph Stiglitz, former World Bank Aide speaks out.

Another criticism is that many nations were forced into compliance with the World Bank because of their ties to colonial powers or their capitalist domination by these selfsame powers, against their wills.

For critical views on the World bank, check out the Bretton Woods Project.
These are the Wikipedia lists of criticisms for the World Bank & IMF