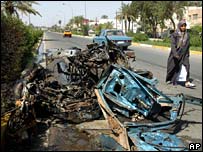 And you thought suicide bombings couldn’t become any more abhorrent:

A US military official has said children have been used in a bomb attack in Iraq, raising fears that insurgents are using a new tactic.

Gen Michael Barbero said a vehicle stopped at a checkpoint was waved through because two children were seen in the back, but was then detonated.Â  Militants were changing tactics in response to tighter security, he said.

Gen Barbero said there had been also two adults in the car. They parked it near a market, abandoned it with the children inside and apparently detonated it.

The two children died, along with three civilians in the vicinity, officials said.