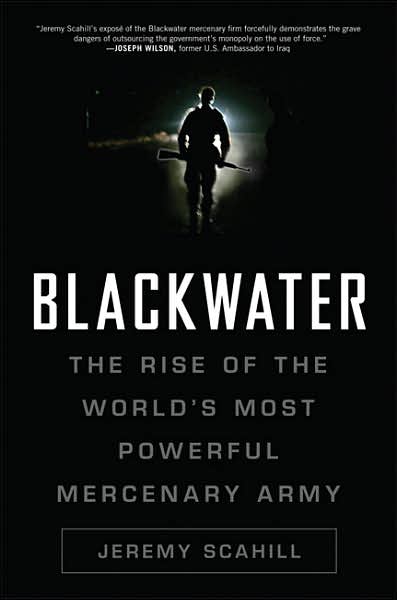 The Bush Administration is increasingly dependent on private security forces to do its dirty work, Jeremy Scahill reveals in his new book, Blackwater: The Rise of the World’s Most Powerful Mercenary Army.Â

The often overlooked subplot of the wars of the post-9/11 period is their unprecedented scale of outsourcing and privatization. From the moment the US troop buildup began in advance of the invasion of Iraq, the Pentagon made private contractors an integral part of the operations. Even as the government gave the public appearance of attempting diplomacy, Halliburton was prepping for a massive operation. When US tanks rolled into Baghdad in March 2003, they brought with them the largest army of private contractors ever deployed in modern war. By the end of Rumsfeld’s tenure in late 2006, there were an estimated 100,000 private contractors on the ground in Iraq — an almost one-to-one ratio with active-duty American soldiers.

To the great satisfaction of the war industry, before Rumsfeld resigned he took the extraordinary step of classifying private contractors as an official part of the US war machine. In the Pentagon’s 2006 Quadrennial Review, Rumsfeld outlined what he called a “road map for change” at the DoD, which he said had begun to be implemented in 2001. It defined the “Department’s Total Force” as “its active and reserve military components, its civil servants, and its contractors — constitut[ing] its warfighting capability and capacity. Members of the Total Force serve in thousands of locations around the world, performing a vast array of duties to accomplish critical missions.” This formal designation represented a major triumph for war contractors — conferring on them a legitimacy they had never before enjoyed.

Contractors have provided the Bush Administration with political cover, allowing the government to deploy private forces in a war zone free of public scrutiny, with the deaths, injuries and crimes of those forces shrouded in secrecy. The Administration and the GOP-controlled Congress in turn have shielded the contractors from accountability, oversight and legal constraints. Despite the presence of more than 100,000 private contractors on the ground in Iraq, only one has been indicted for crimes or violations. “We have over 200,000 troops in Iraq and half of them aren’t being counted, and the danger is that there’s zero accountability,” says Democrat Dennis Kucinich, one of the leading Congressional critics of war contracting.