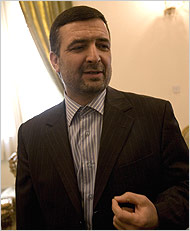 BAGHDAD, Jan. 28 â€” Iranâ€™s ambassador to Baghdad outlined an ambitious plan on Sunday to greatly expand its economic and military ties with Iraq â€” including an Iranian national bank branch in the heart of the capital â€” just as the Bush administration has been warning the Iranians to stop meddling in Iraqi affairs.

Iranâ€™s plan, as outlined by the ambassador, carries the potential to bring Iran into further conflict here with the United States, which has detained a number of Iranian operatives in recent weeks and says it has proof of Iranian complicity in attacks on American and Iraqi forces.[NYTimes]