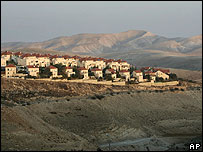 The United States has criticised Israel’s decision to approve the construction of a new Jewish settlement in the West Bank.

In a rare rebuke of its close ally, the State Department said such a construction would violate the peace plan known as the roadmap.

Israel said 30 houses for former Gaza Strip settlers will be built in the Jordan Valley.

The 2003 roadmap calls for a complete halt to all settlement activity.

The EU condemned the Israeli settlement plan on Wednesday.