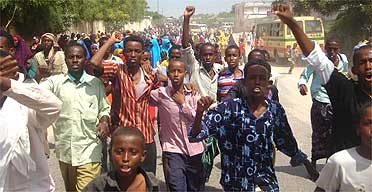 Ethiopia today pressed on with its offensive against Somali Islamists and threatened to seize the Somali capital, Mogadishu. At least two Ethiopian jets fired missiles on retreating Islamist forces, prompting the interim Somali government to claim a partial victory.

Ethiopian warplanes attacked the Mogadishu airport on Monday in a major escalation of fighting between the Ethiopian-backed Somali government and the Islamic Courts movement that in recent months has taken over much of the country. Ethiopia has become increasingly concerned over the Islamist challenge to the interim Somali government, especially after the Union of Islamic Courts issued a call for Muslim fighters around the world to join their “jihad” in Somalia.

The Somali conflict is also being increasingly seen as an Eritrea-Ethiopia proxy war, with Eritrea backing the Union of Islamic Courts and Ethiopia backing the Transitional Federal Government (TFG). The Ethiopian air strikes raised concerns that the fighting in Somali could expand into a regional conflict. A new report by the NY-based Council on Foreign Relations, published before the Ethiopian strikes, echoes such sentiments and states that the conflict ‘has the potential to spread across borders into Kenya and Djibouti.’