The poll, conducted by Zogby International and released Tuesday, shows that 73 percent of military members are â€œcomfortableâ€ with lesbians and gays, and 23 percent â€œknow for sureâ€ that someone in their unit is homosexual, according to results of the poll of 545 service members.

The poll data was used by advocates to show decreasing negative attitudes about gays in the military and to call once again for a change to the â€œdonâ€™t ask, donâ€™t tellâ€ law enacted under President Clinton, which stipulates that gays can serve only if they keep their sexual orientation private and do not engage in homosexual conduct. 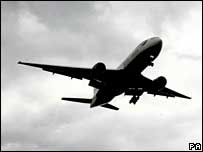 The European Commission has proposed that airlines operating in the EU should pay for any increase in greenhouse gas emissions above current levels. Â  The proposal involves brining internal EU flights inside the bloc’s emissions trading scheme from 2011, with all other flights following in 2012.Â  Air travel is a major, and also often overlooked, source of greenhouse gas emissions – in fact, a round trip flight between NY and London releases more global warming emissions than heating an entire home for a year!

LAZARO CARDENAS, Mexico (AP) — Soldiers trying to seize control of one Mexico’s top drug-producing regions found the countryside teeming with a new hybrid marijuana plant that can be cultivated year-round and cannot be killed with pesticides.

The new plants, known as “Colombians,” mature in about two months and can be planted at any time of year, meaning authorities will no longer be able to time raids to coincide with twice-yearly harvests.

The hybrid first appeared in Mexico two years ago but has become the plant of choice for drug traffickers Michoacan, a remote mountainous region that lends to itself to drug production.

Read the rest of the article

PARIS (Reuters) – A documentary says French special forces had Osama bin Laden in their sights twice about three years ago but their U.S. superiors never ordered them to fire.Â  The French military, however, said that the incidents never happened and the report was “erroneous information.”

“In 2003 and 2004 we had bin Laden in our sights. The sniper said ‘I have bin Laden’,” an anonymous French soldier is quoted as saying.

…the soldier told them it took roughly two hours for the request to reach the U.S. officers who could authorize it but the anonymous man is also quoted in the documentary as saying: “There was a hesitation in command.”

WASHINGTON â€” U.S. Special Forces teams sent overseas on secret spying missions have clashed with the CIA and carried out operations in countries that are staunch U.S. allies, prompting a new effort by the agency and the Pentagon to tighten the rules for military units engaged in espionage, according to senior U.S. intelligence and military officials.

Click to read yet another great article from Salon

[Ed Note.] Salon.com requires you to watch a brief ad to fully access their content if you are not a subscriber – totally worth the few seconds…

BAGHDAD â€” A once-prominent Iraqi American, jailed on corruption charges, was sprung from a Green Zone prison this weekend by U.S. security contractors he had hired, several Iraqi officials said. A Sunni Arab who claimed ties to the insurgency, Sameraei was arrested in August of this year and charged with a dozen counts of misallocating millions of dollars in Iraqi government money. He was sentenced in October to two years’ imprisonment.

A U.S. Embassy spokesman confirmed Monday that Sameraei was no longer in prison. He said U.S. officials scrambled into the evening to locate him.

The Bush administration is split over the idea of a surge in troops to Iraq, with White House officials aggressively promoting the concept over the unanimous disagreement of the Joint Chiefs of Staff, according to U.S. officials familiar with the intense debate.

Joseph A. Christoff, the GAO official who produced the document. “I have all [the Pentagon's] data” for those months, he told me. But the military stamped it classified, he said. And despite making weeks of phone calls, he can’t convince anyone there to declassify the numbers. 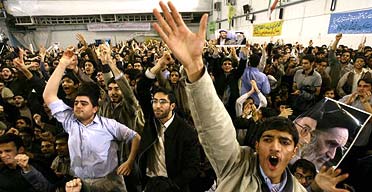 Iranian student activists who staged an angry protest against President Mahmoud Ahmadinejad last week have gone into hiding in fear for their lives after his supporters threatened them with revenge.

A devastating attack on Mr Blair’s justification for military action by Carne Ross, Britain’s key negotiator at the UN, has been kept under wraps until now because he was threatened with being charged with breaching the Official Secrets Act.

In the testimony revealed today Mr Ross, 40, who helped negotiate several UN security resolutions on Iraq, makes it clear that Mr Blair must have known Saddam Hussein possessed no weapons of mass destruction. He said that during his posting to the UN, “at no time did HMG [Her Majesty's Government] assess that Iraq’s WMD (or any other capability) posed a threat to the UK or its interests.”

via The Independent (UK)

The Pentagon has posted the entirety of its 282 page counterinsurgency manual on the Web, for all to read. Considering that the insurgents in Iraq have demonstrated time and time again that they are indeed internet-savvy, this sounds like a wonderful idea. Sure it doesn’t contain classified information, but knowing the methodology and military tactics your opponent embraces has to certainly be helpful. Another genius move from the Department of Defense, don’t you think?
Here is the Manual if you want to check it out.