“The picture I will lay out for you today is not a pretty one and itâ€™s getting worse with the passage of time,” said David M. Walker, Comptroller General of the United States, in a Thursday morning hearing of the Senate’s Budget Committee. “Continuing on our current fiscal path would gradually erode, if not suddenly damage, our economy, our standard of living, and ultimately even our domestic tranquility and our national security,” he warned.

The head of the GAO also warned that if no action is taken now to control government spending, severe tax hikes could be necessary. He stated that, “balancing the budget in 2040 could require actions as large as cutting total federal spending by 60 percent or raising federal taxes to 2 times todayâ€™s level.”

WASHINGTON, Jan. 13 â€” The Pentagon has been using a little-known power to obtain banking and credit records of hundreds of Americans and others suspected of terrorism or espionage inside the United States, part of an aggressive expansion by the military into domestic intelligence gathering.

The C.I.A. has also been issuing what are known as national security letters to gain access to financial records from American companies, though it has done so only rarely, intelligence officials say.

The military and the C.I.A. have long been restricted in their domestic intelligence operations, and both are barred from conducting traditional domestic law enforcement work. The C.I.A.â€™s role within the United States has been largely limited to recruiting people to spy on foreign countries.

By failing to unite behind public financing, Democrats may be blowing a once-in-a-lifetime opportunity to, as President Bush is wont to say, “change the game” of American politics in their favor. Itâ€™s no accident that the rise of conservative power in Washington that began in 1980 and accelerated after 1994 coincided with an exponential increase in the cost of political campaigns. Any system that uses corporate dollars to fund candidatesâ€™ bids for office will, almost by definition, advantage the party that hews closest to corporate interests.

The House yesterday overwhelmingly approved the first increase in the federal minimum wage in nearly a decade, boosting the wages of the lowest-paid American workers from $5.15 to $7.25 an hour over the next two years.

The 315 to 116 vote could begin the process of ending Congress’s longest stretch without a minimum-wage increase since the mandatory minimum was created in 1938. In the past decade, inflation has depleted the value of the minimum wage to the lowest level in more than 50 years.

Eighty-two Republicans joined 233 Democrats to approve the increase. More surprisingly, 54 Republicans abandoned their leadership and voted with the Democrats on a procedural motion that would have forced House leaders to add business tax breaks to the bill.

The Economist has a great article on the topic, “The Federalist Prescription: Extended healthcare to the uncovered, one state at a time” that looks at the new CA proposal, as well as similar policies in MA and other states.

read the letter (via Raw Story)

…But with this change, contractors’ ‘get out of jail free’ card may have been torn to shreds. Previously, contractors would only fall under the Uniform Code of Military Justice, better known as the court martial system, if Congress declared war. This is something that has not happened in over 65 years and out of sorts with the most likely operations in the 21st century. The result is that whenever our military officers came across episodes of suspected contractor crimes in missions like Bosnia, Kosovo, Iraq, or Afghanistan, they had no tools to resolve them. As long as Congress had not formally declared war, civilians — even those working for the US armed forces, carrying out military missions in a conflict zone — fell outside their jurisdiction.

Great article from the Washington Post on the divergent voting records of the two presumed front-runners for the 2008 Democratic nomination. 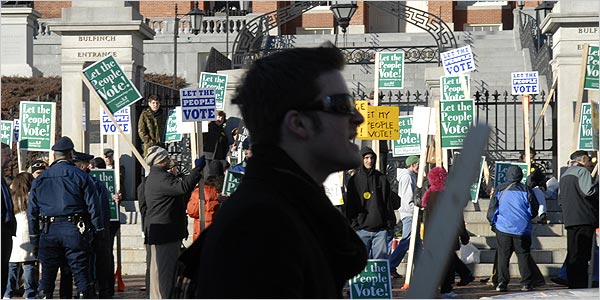 BOSTON, Jan. 2 â€” Massachusetts, the only state where same-sex marriage is legal, took a first step toward possibly banning it Tuesday when legislators voted to advance a constitutional amendment defining marriage as the union between a man and a woman.

The amendment now requires the approval of at least 50 legislators in another vote in the 2007-8 session. Then it would be placed on the November 2008 ballot as a referendum question…

The state’s new governor, Deval Patrick, said â€œI believe that adults should be free to choose whom they wish to love and to marry,â€ adding that he objected to using the constitutional amendment process â€œto give a minority fewer freedoms than the majority.â€ After the vote, Mr. Patrick said in a statement, â€œWe have work to do over the next year to turn this around.â€

Add Biden to your candidate ’08 pool…

“I’m the only guy who will tell you honestly what I’m doing. The others won’t tell you, but I will,” Biden said, wrapping up a fundraising trip to New York before heading to New Hampshire, his ninth visit in just over a year. He’s also campaigned extensively through other early voting states, spending 17 days in Iowa, nine in South Carolina, and four in Nevada.

Considered one of his party’s most experienced spokesmen on international affairs, Biden will assume the chairmanship of the Senate Foreign Relations Committee next month. He plans immediately to convene a series of hearings on the Iraq War – a high visibility platform for him to showcase his expertise. He’s also been actively promoting a detailed plan for peace in Iraq that would divide the country along ethnic lines.

There are conflicting reports that Senator Johnson of South Dakota had a stroke today and is currently hospitalized. Aides and the Senator himself realized something was awry when the Senator began to stutter during a radio interview, after which reports say the Senator lost all ability to speak. The on-staff doctors were notified and an ambulance subsequently took the senator to the George Washington hospital in downtown DC.

Many have noted that should Johnson not be able to continue service that the Republican governor of South Dakota, Mike Rounds, would appoint his replacement to take the seat until the end of what would have been Johnsonâ€™s term in 2008. If this were to happen, the 51-49 Dem/Rep split in the Senate that was the result of the midterm elections would return to the 50-50 split that we have now, with VP Dick Cheney being tie-breaking vote, essentially creating a Republican majority (albeit one that is not veto proof)

It is however important to note, as Tim Russert did on NBC Nightly News tonight, that there is indeed quite the interesting precedent for such a situation, ironically also involving South Dakota. In 1969, Senator Mundt suffered a stroke and was incapacitated. After demanding that the governor appoint his wife to fill his seat, which the governor refused to do, Mundt refused to step down thus preventing the governor from appointing a replacement. He remained in office until his term ended in 1973.

Weâ€™ll link to MSNBC on this one since they were the ones that broke the story.

Update: There are now reports that the Senator did not actually suffer a strokeâ€¦.Regardless, we wish the Sen. Johnson a speedy recovery (and not just because the balance of power is at stake, but because we ninjas have feelings too)

We should have known not to get our hopes up! We canâ€™t even recommend that ninjas use absentee ballots because often times election officials donâ€™t count them anyway (unless there is a recount)

Previous MNP post on the NIST recommendation for a paper trail

According to documents obtained for Wired News under federal sunshine laws, the Air Forceâ€™s Active Denial System, or ADS, has been certified safe after lengthy tests by military scientists in the lab and in war games.

The beam produces what experimenters call the â€œGoodbye effect,â€ or â€œprompt and highly motivated escape behavior.â€ In human tests, most subjects reached their pain threshold within 3 seconds, and none of the subjects could endure more than 5 seconds.

The ADS was developed in complete secrecy for 10 years at a cost of $40 million. Its existence was revealed in 2001 by news reports, but most details of ADS human testing remain classified. There has been no independent checking of the militaryâ€™s claims.

The development of a truly safe and highly effective nonlethal crowd-control system could raise enormous ethical questions about the stateâ€™s use of coercive force. If a method such as ADS leads to no lasting injury or harm, authorities may find easier justifications for employing them.