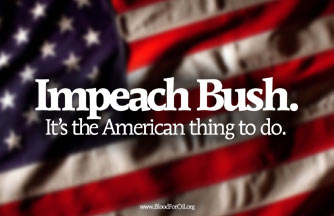 Spread this list to as many people as possible. Thanks alpha80!

As prospects grow for a Democratic takeover of the House of Representatives, and perhaps even the Senate, this November, the idea of impeachment is gaining attention. Yet even as polls show increasing numbers of Americans supporting the idea of removing Bush from office before the end of his term, Democratic Party leaders keep backing away.
This is not simply bad politics. It is cowardly, wrong and dangerous.
Let’s look at the facts.

1. Initiating a war of aggression against a nation that posed no immediate threat to the U.S.–a war that has needlessly killed 2500 Americans and maimed and damaged over 20,000 more, while killing over 125,000 innocent Iraqi men, women and children.

2. Lying and organizing a conspiracy to trick the American people and the U.S. Congress into approving an unnecessary and illegal war. (forged â€œYellow cakeâ€ document, â€œsignedâ€ by a man who hadnâ€™t been in office for 10 years, at the time of the supposed signing.)

3. Approving and encouraging, in violation of U.S. and international law, the use of torture, kidnapping and rendering of prisoners of war captured in Iraq and Afghanistan and in the course of the so-called War on Terror.

4. Illegally stripping the right of citizenship and the protections of the constitution from American citizens, denying them the fundamental right to have their cases heard in a court, to hear the charges against them, to be judged in a public court by a jury of their peers, and to have access to a lawyer. (Jose Padilla, etc.)

5. Authorizing the spying on American citizens and their communications by the National Security Agency and other U.S. police and intelligence agencies, in violation of the First and Fourth Amendments and the Foreign Intelligence Surveillance Act (FISA).

6. Obstructing investigation into and covering up knowledge of the deliberate exposing of the identity of a U.S. CIA undercover operative, and possibly conspiring in that initial outing itself.

7. Obstructing the investigation into the 9-11 attacks and lying to investigators from the Congress and the bi-partisan 9-11 Commission–actions that come perilously close to treason.

8. Violating the due process and other constitutional rights of thousands of citizens and legal residents by rounding them up and disappearing or deporting them without hearings.

9. Abuse of power, undermining of the constitution and violating the presidential oath of office by deliberately refusing to administer over 750 acts duly passed into law by the Congress–actions which if left unchallenged would make the Congress a vestigial body, and the president a dictator.

Each one of these offenses (and it is not meant to be a complete list) would be sufficient on its own to require the presidentâ€™s removal from office, and in some cases, where an actual statutory crime can be charged, his subsequent indictment and trial. Together they cry out for impeachment and removal.

There are those, like House Minority Leader Nancy Pelosi (D-CA), who argue against impeachment, claiming that it would be a diversion from the “important agenda” of the Democratic Party. Aside from the fact that there is not much “there” there in the so-called agenda of the so-called opposition, the reality is that the Democratic Party, should it manage to win a majority in House and Senate in November, will be unable to accomplish a single thing with President Bush in the White House, since the president has already claimed that he has the power to violate and ignore 750 acts and laws passed by a Congress led by his own party. Before the Democrats can count on a single bill of theirs becoming the law of the land, they will have to remove this usurper from office. Even ardent conservatives should be afraid of leaving stand actions that, if unchallenged, will set a precedent for all future presidents, Republican and Democrat, making American presidents into tyrants answerable to no one.

There are those who fear that impeaching Bush would mean turning over the White House to Vice President Dick Cheney. This is nonsense. The vice president has long been known to be the real president, and any constitutional crimes that are exposed in the course of impeachment hearings will quickly be traced also to Cheney’s office. The vice president, however, does not have the president’s Constitutional immunity from prosecution, and would likely be indicted and forced to resign long before Bush’s impeachment got to a Senate trial. Nor would impeaching Bush mean turning the White House over to Rep. Dennis Hastert. Besides the fact that Hastert is reportedly facing his own legal troubles, impeachment is not even going to occur unless the Democrats take over the House in November first, and that would make the next person in line after Cheney none other than Democrat Pelosi.

There are people, especially in the media, who say impeachment is a bad idea both because it would allegedly cause a “constitutional crisis” and because it would lead to public anger at Democrats who promoted another divisive political battle. This is both unprincipled and absurd. First of all, impeachment is no constitutional crisis: the Founders thought it so important that they included impeachment of the president in the same Article II of the Constitution that defines the presidentâ€™s powers. If anything, we are facing a constitutional crisis right now. Impeachment is an integral part of the governing process. Secondly, polls suggest that a majority of Americans favor impeachment — certainly more than ever favored impeachment of either Clinton or Nixon. People have had it with the sanctimoniousness, the dishonesty, the staggering incompetence and the nasty political dirty tricks of this administration. Third, they want an opposition that will stand on principle. But finally and most importantly, the crimes of this president and this administration are so grievous that it is shameful to even talk about practicalities and political advantage. The president simply must be impeached, because as the Willie Sutton of Constitutional violators he is putting the Republic and the Constitution at grave risk. The only principled and valid discussion about strategy is about how best to achieve impeachment, not about whether to seek impeachment.

No one should imagine that a successful impeachment of President Bush would usher in some wonderful new world of honest and progressive government. The Democratic Party long ago lost its soul and its right to call itself a party of the people. But if the American people, in the course of this 2006 election year, force the Democratic Party to do that which their leaders are afraid to do–to impeach this criminal president–there is a chance that those same people will also push the Democratic Party to do other things that it has not done in decades: namely to act in the interests of ordinary working people instead of the same moneyed interests that own the party of Lincoln.

One thought on “Impeach the Goon”