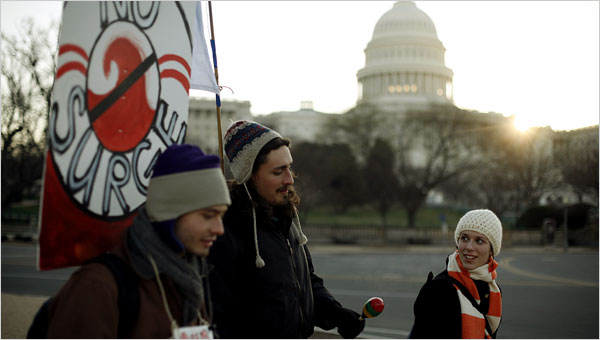 too bad these didn’t get press coverage BEFORE the war…

WASHINGTON, Jan. 27 â€” Tens of thousands of protesters converged on the National Mall on Saturday to oppose President Bushâ€™s plan for a troop increase in Iraq in what organizers hoped would be one of the largest shows of antiwar sentiment in the nationâ€™s capital since the war began…

Demonstrators listened to speeches from a roster of politicians and entertainment figures including the Rev. Jesse Jackson; Representative Dennis J. Kucinich, Democrat of Ohio and a candidate for the presidency in 2008; and Representative Maxine Waters, Democrat of California. The actors Jane Fonda, Susan Sarandon and Tim Robbins also addressed the crowd.

Veterans were more numerous among the crowd.

Fernando Braga, a 24-year-old Bronx native who is a member of the Army National Guard, said that he was skeptical of the war before it started. Mr. Braga said his views hardened into opposition while he served in Iraq from March 2004 through January 2005. â€œMy own commander told us when we arrived that if we thought we were there for any reason other than oil then we had another thing coming,â€ he said. â€œI realized even commanding officers were against it but following orders.â€