This is just extremely sad… 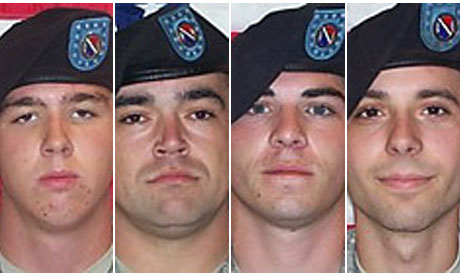 Twelve American soldiers face charges over a secret “kill team” that allegedly blew up and shot Afghan civilians at random and collected their fingers as trophies.

Five of the soldiers are charged with murdering three Afghan men who were allegedly killed for sport in separate attacks this year. Seven others are accused of covering up the killings and assaulting a recruit who exposed the murders when he reported other abuses, including members of the unit smoking hashish stolen from civilians.

In one of the most serious accusations of war crimes to emerge from the Afghan conflict, the killings are alleged to have been carried out by members of a Stryker infantry brigade based in Kandahar province in southern Afghanistan. ##LINK##