Itâ€™s a utopian fantasy- discover a ghost town and rebuild it in line with your ideals-, but in Spain where there are nearly 3000 abandoned villages (most dating back to the Middle Ages), some big dreamers have spent the past 3 decades doing just that.

There are now a few dozen â€œecoaldeasâ€ – ecovillages – in Spain, most build from the ashes of former Medieval towns. One of the first towns to be rediscovered was a tiny hamlet in the mountains of northern Navarra.

It was rediscovered in 1980 by a group of people living nearby who had lost their goats and â€œwhen they found their goats, they found Lakabeâ€, explains Mauge CaÃ±ada, one of the early pioneers in the repopulation of the town.

The new inhabitants were all urbanites with no knowledge of country life so no one expected them to stay long. At first, the homes werenâ€™t habitable so they lived 14 in a large room. Slowly they began to rebuild the homes and the gardens.

When they first began to rebuild, there was no road up to the town so horses were used to carry construction materials up the mountain. There was no electricity either so they lived with candles and oil lamps.

After a few years, they erected a windmill by hand, carrying the iron structure up the hill themselves. â€œEven though it seems tough and in some ways it was, but you realize you’re not as limited as you think,â€ says Mauge. â€œThere are a lot of things people think they can’t do without a lot of money and there’s never been money here.â€

In the early years, they generated income by selling some of their harvest and working odd jobs like using their newfound construction experience to rebuild roofs outside town. Later they rebuilt the village bakery and sold bread to the outside world.

Their organic sourdough breads now sell so well that today they can get by without looking for work outside town, but it helps that they keep their costs at a minimum as a way of life. â€œThere’s an austerity that’s part of the desire of people who come here,â€ explains Mauge. â€œThere’s not a desire for consumption to consume. We try to live with what there is.â€

Today, the town generates all its own energy with the windmill, solar panels and a water turbine. It also has a wait list of people whoâ€™d like to move in, but Mauge says the answer is not for people to join what they have created, but to try to emulate them somewhere else.

â€œIf you set your mind to it and there’s a group of people who want to do it, physically they can do it, economically they can do it. What right now is more difficult is being willing to suffer hardship or difficulties orâ€¦ these days people have a lot of trouble living in situations of shortage or what is seen as shortage but it isn’t.â€ (Source)

A couple hours drive on a dusty road outside of the southern town of Masaka, Uganda, youâ€™ll find Musubiro Village. Miles from the closest electricity grid, there is little hope of government power coming this way anytime soon.

In Musubiro, like so many other villages across Africa, the main source of light is kerosene- which is not only expensive, but has a myriad of negative health side affects, and the risk that always comes when you mix open flames and straw thatched roof dwellings. Typically, the dayâ€™s chores are done, childrenâ€™s studying is over, and small shops are closed when the sun goes down at 7:30 p.m.

Barefoot Power, a for-profit social enterprise operating across East Africa, has built a network of â€œSolar Entrepreneursâ€ who are responsible for bringing solar lighting to towns and villages like Musubiro all across Uganda. Their products, ranging from the extremely popular â€œFirefly Mobileâ€, a small 1.5 watt panel with 12 small LED lights and a phone charger, or their full â€œVillage Kitsâ€ that can provide lighting to an entire house, are making solar power affordable and accessible to those at the base of the economic pyramid. The small solar panels are portable and once charged, act like a battery.

Barefoot Power currently has 160 Solar Entrepreneurs operating all over Uganda, and an extensive distribution network which makes its products available to customers across Kenya, Tanzania, India, and several other parts of the world. (Source)

A schoolboy from Nepal has come up with a recession-busting new solar panel which replaces the silicon component with human hair. Milan Karki, an 18-year-old student from the region of Khotang, devised the idea after discovering that hair pigment Melanin acts as an energy converter.

Each panel, which is around 15 inches square, produces 9 Volts (18 Watts) of energy, and costs $38 to make. This, it has to be said, is mainly due to the price of the raw materials: half a kilo of human hair costs around 25Â¢ in Nepal. Karki is hoping to commercialize his invention, which can charge a cellphone or power batteries to provide an evening’s worth of light, and eventually mass produce it.

“First I wanted to provide electricity for my home, then my village,” says Karki, who was inspired by British physicist Stephen Hawking. “Now I am thinking for the whole world. We have begun the long walk to save the planet.” (Source)

Solar-sintering aims to raise questions about the future of manufacturing and triggers dreams of the full utilisation of the production potential of the worldâ€™s most efficient energy resource – the sun. Whilst not providing definitive answers, this experiment aims to provide a point of departure for fresh thinking. :Read on:

MIT reported on Monday that researchers have a used genetically modified virus to produce structures that improve solar-cell efficiency by about one-third.

MIT researchers said they have found a way to make significant improvements to the power-conversion efficiency of solar cells by using a tiny virus to perform detailed assembly work at the microscopic level.

Sunlight hits a light-harvesting material in a solar cell, which releases electrons that can produce an electric current.

The research of this new study is based on findings that carbon nanotubes can enhance the efficiency of electron collection from a solar cell’s surface.

A solar-powered art exhibit? It wouldn’t be the first time we’ve covered something of that sort on the vaunted pages of mnp, but it could be the coolest.

Creating the effect of an enchanted forest of singing trees, Craig Colorusso’s “Sun Boxes” installation can be walked through in a leisurely manner, or run through at full speed in a last ditch and extremely risky move to avoid the approaching enemy.

Sun Boxes is a solar powered sound installation. It’s comprised of twenty speakers operating independently, each powered by the sun via solar panels. Inside each Sun Box is a PC board that has a recorded guitar note loaded and programmed to play continuously in a loop. These guitar notes collectively make a Bb chord. Because the loops are different in length, once the piece begins they continually overlap and the piece slowly evolves over time.

Basically, I imagine this to be one harmonious but constantly changing, amplifying, and diminishing barrage of sound that keeps on rocking (God forbid it’s cloudy out). Although not billed as such, I find this to be a potentially very interesting and mesmerizing marriage of sound and mathematics. Plus, this ninja is from Beantown! 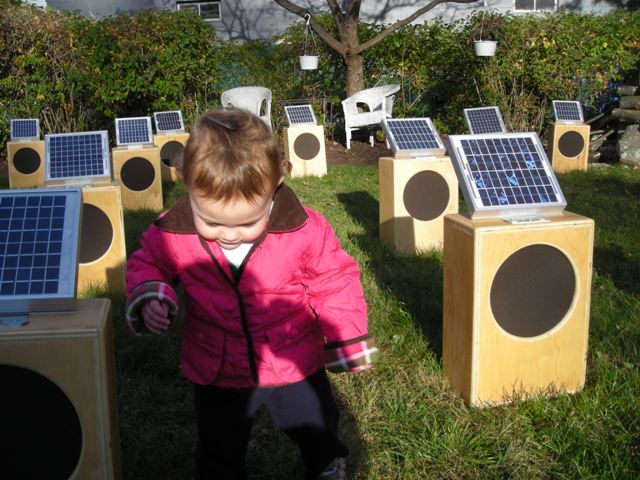 Craig will be at the IMA from March 18-20, for what we hope are 3 beautiful days. We recommend you wander amongst the enchanted sound-forest, put don’t pick the flowers!

We are all reliant on the sun. It is refreshing to be reminded of this. Our lives have filledup with technology. But we still need the sun and so does Sun Boxes. Karlheinze Stockhausen once said “using Short-wave radios in pieces was like improvising with the world.” Similarly, Sun Boxes is collaborating with the planet and its relation to the sun. 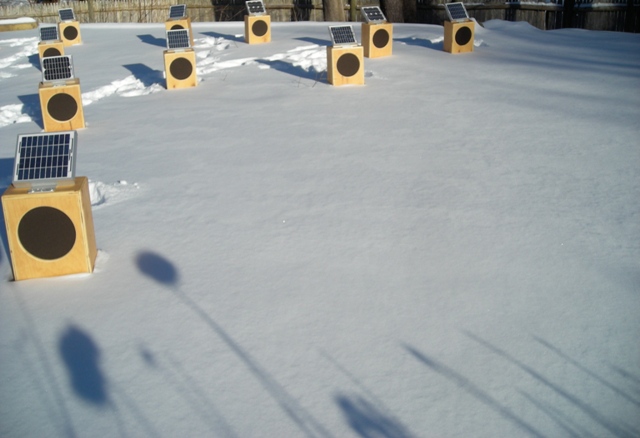 Around the world, there are shortages ofÂ food andÂ clean drinking water, but what you may not realize is that there is also a shortage of light for those dark nights in electricity-less areas. A group of students from theÂ University of Michigan have come up with a solution: Emerald, a portable solar panel-powered device that provides 100 lumens of light and power for your electronics.

These engineering students founded the start-up companyÂ June Energy. One of the students, Abdrahamane TraorÃ©, comes from Mali where he grew up doing his homework with a kerosene lamp in a poor village. The kerosene lamp doesn’t provide sufficient lighting–only about 60 lumens of light–and can be bad for health. Plus you have to continuously buy kerosene fuel for it which can get expensive.

Emerald will provide 100 lumens of light, a USB charging dock, cell phone ports, and a number of adapters. The device charges in only three hours in full sunlight. It can charge a smartphone in the same time it takes to charge by an outlet, and the device can provide light for eight full hours. The students hope to get the price to under $20. (Source)